THE SCIENCE OF LASER THERAPY

The History of the Laser

The word laser is actually an acronym for Light Amplification by Stimulated Emission of Radiation. Not long after its first discovery in 1960, the first medical laser was developed for heating, cutting, cauterizing or destroying tissue.

However, in 1967 a Hungarian physician, Dr Endre Mester unintentionally discovered that low power, “cool” laser light which did not heat, cut or destroy tissue, could actually stimulate it to create a physiologic response. Beaming a low power, 694 nm ruby laser on the backs of shaved mice, he sought to determine if it caused cancer. Instead, he observed more rapid regrowth of the mice's hair.

Since that time there have been over 100 randomized controlled trials evaluating the use of low power lasers to stimulate various therapeutic responses in human tissue. This low-level laser light therapy is now referred to in the medical literature as photobiomodulation, or PBM.

It was more than 40 years after the original experiment by Mester before a direct to consumer photobiomodulation medical device to treat hair loss was developed.

How does Photobiomodulation work for stimulating hair growth?

The International Society of Hair Restoration Surgery explains that:

"Researchers are not certain how PBM works to stimulate hair growth, but believe it has to do with stimulating hair to enter the growth phase (anagen re-entry), prolongation of the growth cycle (prolongation of anagen), a proliferation of hair in the active growth cycle (anagen), and prevention of premature catagen (the rest phase of hair growth). It has even been postulated to have an effect on modulating 5 alpha-reductase activity—the enzyme that converts testosterone into dihydrotestosterone (DHT)—with the latter considered to be a cause of hair loss in androgenetic alopecia (AGA)."

In other words, low-level laser therapy works by:

How Effective is Low-Level Laser Therapy?

In 2016, a review of the many research studies on the effect of low-level laser therapy found that FDA-cleared laser devices are both safe and effective in patients with Male Pattern Hair Loss and Female Pattern Hair Loss who did not respond or were not tolerant to standard treatments.[1] 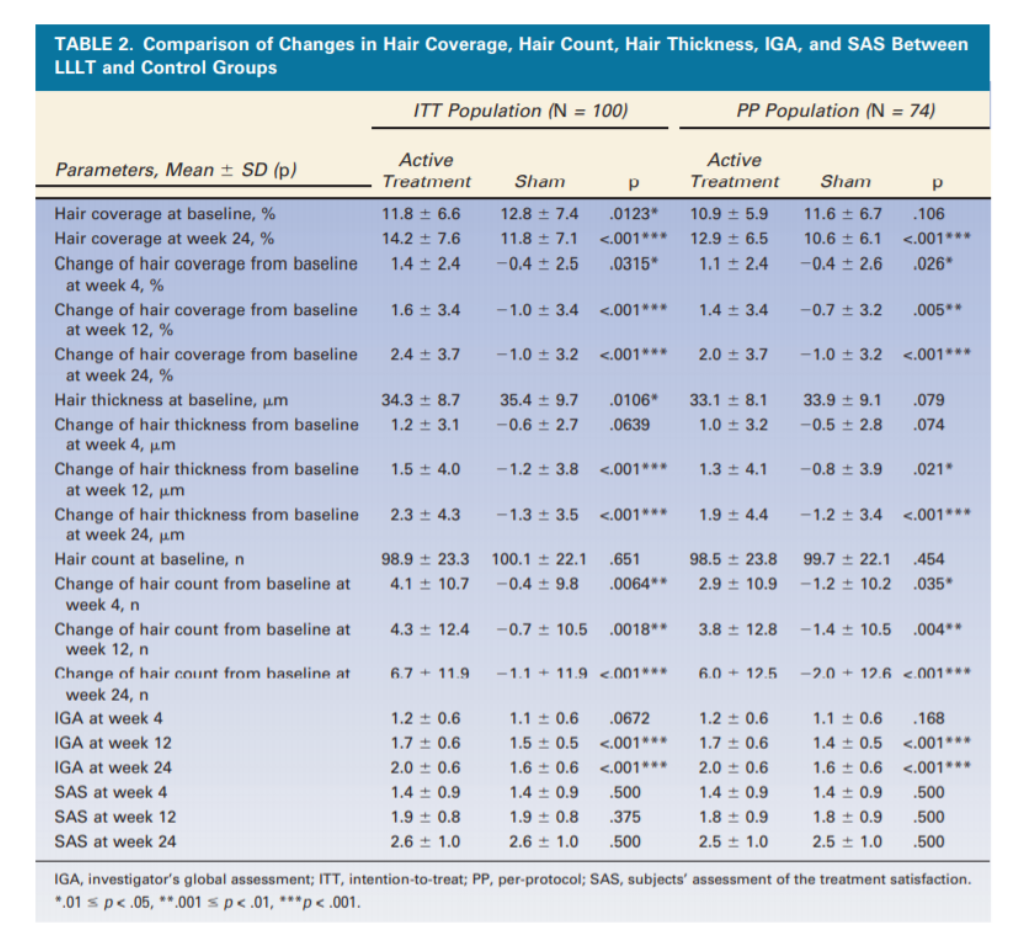 Additional studies provide evidence that in a sham (placebo) group, hair counts and thickness per square cm actually fall a little after 24 weeks, but in the laser group they actually increase - on average 7 more hairs per square cm and hairs that are on average 2.3 micrometres thicker than before. (See Table 2 to the left.)[2]

Figure 3 (shown to the right) provides further microscopic photo evidence to showcase the efficacy of laser treatment for hair growth. Figure A (top left) is before treatment with a sham (placebo) device, and Figure B (top right) shows the same subject 24 weeks later. There is no difference between A and B. Figure C (bottom left) is before treatment with a laser device, and Figure D (bottom right)is the same subject after 24 weeks of treatment. There are visibly more hairs in Figure D compared to the originating Figure C. [2] 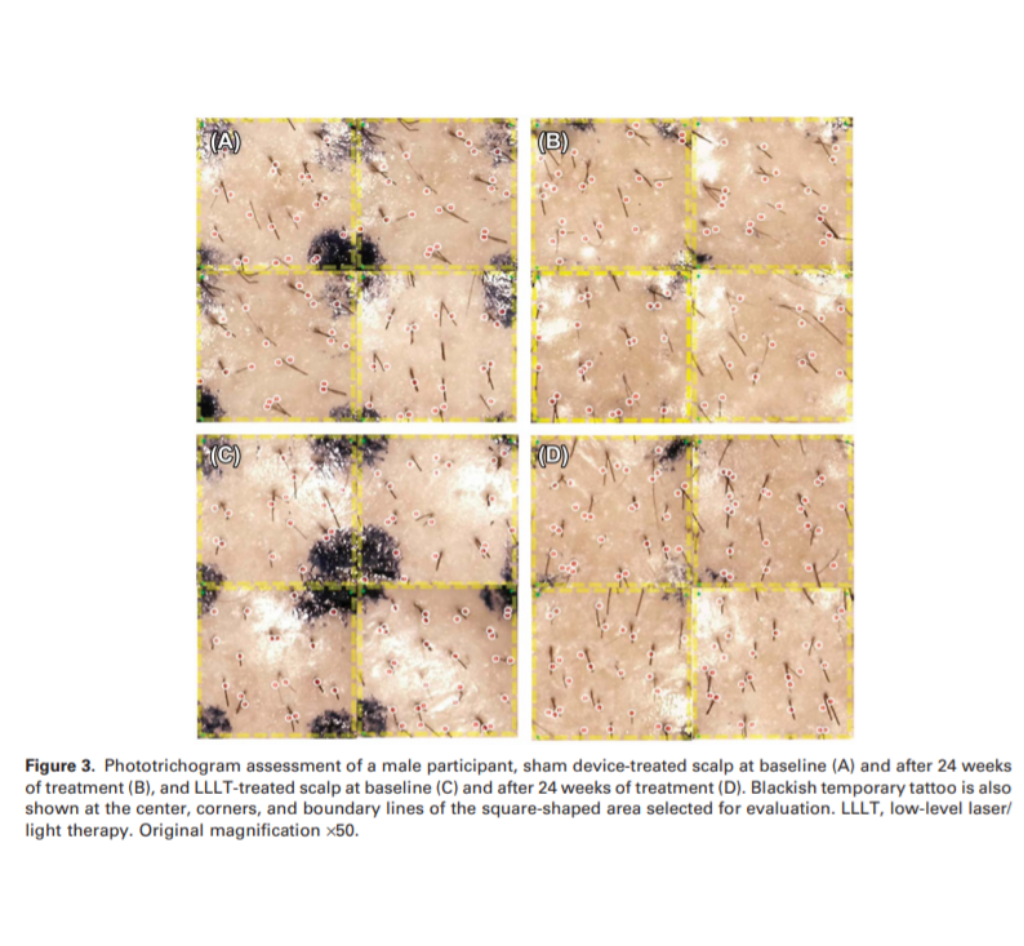 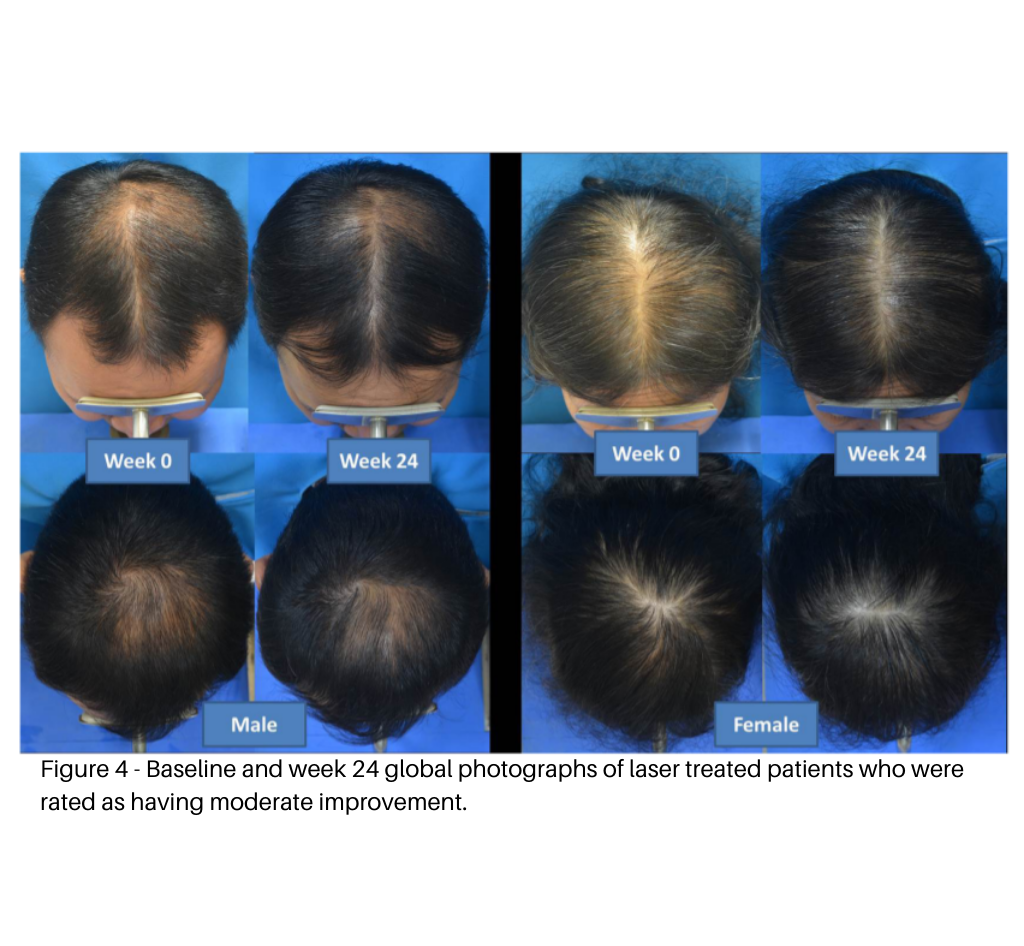 Yet another study had subjects use the laser hair therapy device for 24 weeks. Laser users had an increase of 10 hair/square centimetre compared to only 4 hairs/square centimetre for users in the sham (placebo) group. In addition to the number of hairs, after 24 weeks, laser users saw an increase in hair shaft diameter of 6 micrometres compared to an increase of only 3 micrometres in the sham (placebo) device usage. (See Figure 4 to the left.)[3]

This condition is like that experienced in men and is also the most common cause of hair loss in women.  It also results from hair miniaturization. However, while men tend to experience hair loss in the frontal hairline and vertex, women usually retain their frontal hairline and instead have a loss of density in the frontal one to two-thirds of the scalp.

It is classified according to the Ludwig Scale, and has also been described as occurring in a “Christmas Tree” pattern with a widening of the part toward the front.  Some women may have very diffuse thinning all over.

As in male pattern hair loss, this condition is very treatable using a combination of medical and surgical approaches.  For women, topical minoxidil is the only FDA-approved medication. Some low-level light therapy (LLLT) devices (including BIOLIGHT) are FDA cleared for use in treating female pattern hair loss.

This is the most common form of hair loss in men, with a possible lifetime risk of 50-70% of all males. It is characterized by miniaturization of scalp hairs, where thick terminal hairs are replaced by finer, thinner versions of themselves.

There is also less time spent in the growth (anagen) phase and more time spent in the resting (catagen) and falling (telogen) phases of the hair cycle. The result is the appearance of thinner hair that is decreased in size and number of follicles.

This condition typically runs in families. Classification of male pattern hair loss is often described using the Hamilton-Norwood Scale of hair loss, which stratifies severity based on the area of involvement and extent of hair loss. Most commonly, men experience hair loss in the frontal hairline and vertex (crown) of the scalp. Though this condition is often distressing to patients, many medical and surgical treatment options are available. 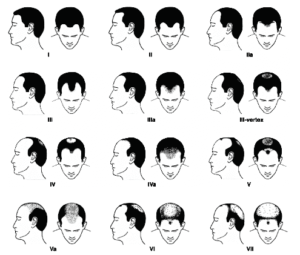 Currently, medications for male pattern hair loss approved by the FDA and Health Canada are topical minoxidil and oral finasteride. However, there are various low-level light therapy (LLLT) devices (including BIOLIGHT) that are not medications but are FDA cleared for use in treating androgenetic alopecia.

Use your BIOLIGHT Medical Hair Therapy device for just 7 to 15 minutes daily or 14 to 30 minutes every other day for effective treatment.